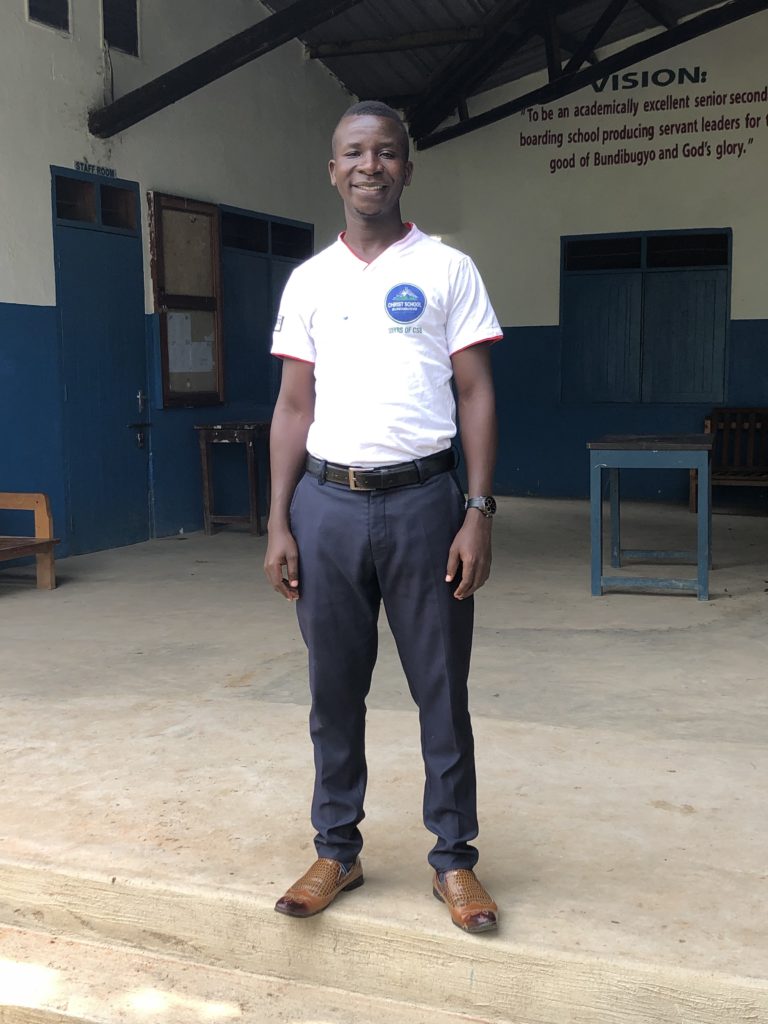 “My dream has always been to be a teacher”

Tumusabe Benard grew up in Bundibugyo District, the middle child of three in his family.  He attended Semuliki High School, several kilometers up the road from Christ School, but always remembers growing up and wanting to be a student at CSB.

“We would go to football camps as a child.  They’d put us on teams and create little tournaments.  We would look around the campus and the pitch and think, ‘Wow, what it would would be like to go here!’”  But his family couldn’t afford the tuition, so he went elsewhere for the four years of Ordinary Level.

During that time, Benard felt the Lord giving him a vision of his future.  “My dream has always been to be a teacher,” he said, “a secondary (school) teacher”.  He knew to accomplish this he had to complete Advanced Level somehow.  If he could not afford to attend school, his best option was to go straight to a Primary Teacher’s College, and that’s what everyone encouraged him to do.  “I knew that was my option,” Tumusabe said, “but that was not my passion.  I wanted to be a secondary teacher.”  Then a friend told him about Christ School’s Advanced Level scholarship program.  Thanks to financial partners in America, students completing A-Level are eligible for full ride scholarships, based on academic performance as well as need.  In 2012, Benard received one of these precious scholarships from Christ School.

“Without CSB I would have no hope”

Benard attended Christ School Bundibugyo for his S.5 and S.6 years.  Thanks to the top-notch education at CSB, and his own work ethic, Benard earned 12 points on the UACE exam, which helped him receive a statehouse scholarship that completely paid for his university degree.  “Without CSB, I would have no hope.  It gave me hope to pursue what I wanted – to be a secondary school teacher.”  He went on to earn a Bachelor of Science in Education at Kyambogo University in Kampala.

“I wanted to give back to my community, to be a solution to the educational needs”

During his studies, Benard completed practicum requirements at a school in Kampala.  He was so effective, even as a pre-service educator, that the Head Teacher offered him a high-paying job even before he graduated.  “I had decided to complete my last school practice back in my home community, Bundibugyo.  I was completing a practicum at Christ School when the Head Teacher from Kampala offered me a job.  It was a tough decision.  But I wanted to give back to my community, to be a solution to the educational needs here.”  So Benard turned down the lucrative job offer in Kampala, and upon graduation was quickly hired as a teacher at Christ School Bundibugyo in 2016.

“I never had any spiritual foundation growing up”

In reflecting upon his years at Christ School Bundibugyo, Benard said, “What I loved about CSB was the spiritual development, like Chapel and Sunday service and Cell Groups.  Sincerely, I never had any spiritual foundation growing up, I didn’t even own a Bible, and then CSB gave me a Bible and taught me how to read it.  We had evening devotions, where we learned about the truth and goodness of God”.  Benard also appreciated the boarding school atmosphere, and what that provided him.  “I loved giving out and living together in Christ. The members could settle problems as a family; we’d fast for other candidates during their exams, and pray for each other.  We were also learning how to fill the gaps as leaders in our community together.”

“It gives me joy to teach and give hope to students”

At Christ School Bundibugyo, Benard has quickly found success among students and with his colleagues.  He teaches Mathematics as well as Economics, at O-Level and A-Level.  Before the COVID-19 school closure, he was on track to launch a new Physical Education program for S.1’s as well.  On top of that, he is CSB’s new Procurement Officer, responsible for all purchases on campus, much of which includes the food that feeds three meals a day to all staff and over 350 students.  He serves on the Spiritual Life team as well, collaborating and planning on matters pertaining to the spiritual growth of both staff and students.  And, as he loves football so much, and Arsenal in particular, he also coaches as an assistant on the CSB Boys football team.  As Benard relishes in the fulfillment of a lifelong dream, he said, “It gives me joy to teach because I can give the same hope to students that I received”.

When asked what he’d like to say to U.S. donors that supported his dreams, and that provide opportunities to many students now, Benard shared:

“You gave hope to the hopeless; you touched people you didn’t know. God used you to serve even when you were in America. You changed lives of many, and the hands that you extended had many fingers and many people those fingers are serving.  Supporting a person at Christ School  has liberated many hopeless people in the district, contributing to filling and developing Bundibugyo district – educationally, spiritually, and in many, many sectors of our society.  Without CSB, Bundibugyo would be trailing very far behind.

The love to support Christ School is a very good spirit. It is amazing the fruit that exists, genuine from over the seas.  God will bless you for the living testimonies, a miracle when you trace my background, and the complete fulfillment is a testament to anyone who contributed.  Thank you!”

Christ School Bundihttps://christschoolbundi.org
Previous Post
COVID-19 Magnifies the Digital Divide Across the Globe
Next Post
To Rise Up and Build During COVID-19